Last week was a trial. All my recipes had some kind of flub or mishap by yours truly, so I'm really, really hoping that this week goes better.

On Thursday, a friend and I attempted a road trip to Owen Sound. The trip
started off nice as we both just wanted to escape the city for a while and go somewhere. Unfortunately, much like my cooking week, our trip was plagued with troubles. The wiper fluid finally froze in the lines and left us with somewhat limited sight, the huge snow drifts in the country coupled with fairly high winds ended up blinding us completely and forced us to abandon the trip, and our dinner at East Side Mario's was pretty abysmal. The dish we both ordered was supposed to be penne topped with alfredo and Bolognese sauce, but when it arrived, the pasta was practically naked, save for a weird melting of cheddar cheese. I wouldn't want to go back, nor would I recommend ever eating there.

Even though we never made it to Owen Sound, and the trip was one disaster after another, we still both had a lot of fun. Road trips are as much about the company as the exploration. And so is cooking. I know there will always be mistakes and failures, and I know those are teaching me more about fundamentals of cooking, but ultimately, I'm having a lot of fun learning. I'd rather try and fail at new recipes occasionally than always eat the same twenty items. There's just too much to taste to give up! 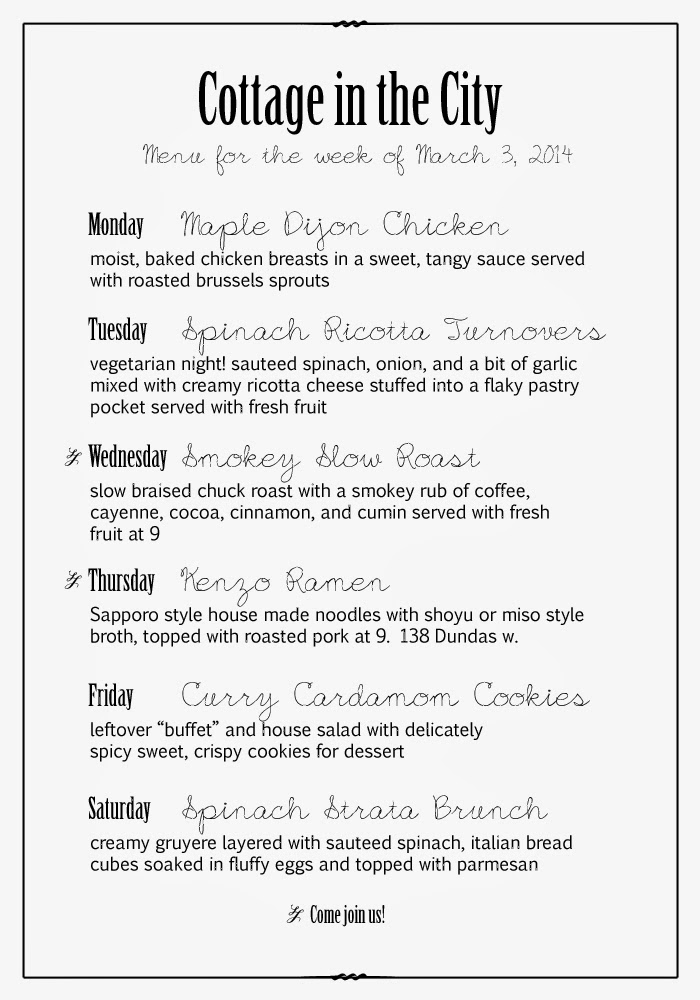 Cooking this week has been disappointing. Monday's bland chicken and mushy rice, and Tuesday's reading disaster left both of us unsatisfied at the end of the night. I know this sort of thing is always a risk when trying out new recipes, but cooking is primarily about pleasing those who eat the food.

Yes, I like to learn about new ingredients and techniques, but I mostly want to eat those delicious things!

Wednesday night was another new recipe. BBQ Chicken Pizza from The Turquoise Home. Being a fan of straight up pepperoni pizza, I never order BBQ pizza when doing take out or delivery. About the only time I've ever tried this flavor combination is when having a slice at Cici's pizza. (For the Canadians out there, it's basically a place to get super cheap pizza in a buffet/all-you-can-eat style.)

Still, I'm a fan of using ingredients from the fridge as much as possible instead of constantly buying foods and throwing them out. A few weeks ago we tried Kludgy Mom's Slow Cooker Ribs and only used half a bottle of BBQ sauce. I also needed cilantro for Tuesday's Red Curry Lentils, and bacon is a staple in this house.

That means I only needed to buy some Mozzarella, which would also be used for Saturday Night's "Survival Rations" (more on that later), and some chicken. As mentioned on the menu post, we found a lovely smoked chicken at European Quality Meats.

First, I'll say I didn't really follow the recipe. I mean, it's pizza. Laura even says the pizza is easily customized, so I used her recipe as a template. Here are my changes:


The last change deserves an explanation. The original dough called for an entire tablespoon of yeast and only 5 minutes of rise. My previous experience working with breads and doughs comes mostly from Peter Reinhart's excellent tome, The Bread Baker's Apprentice. Pizza dough isn't a quick bread, like banana bread. Giving the dough time to relax and rise imparts flavor and texture to the crumb.


The single biggest flaw in most pizza dough recipes is the failure to instruct the maker to allow the dough to rest overnight in the refrigerator (or at least for a long time). This gives the enzymes time to go to work, pulling out subtle flavor trapped in the starch. The long rest also relaxes the gluten, allowing you to shape the dough easily, minimizing the elastic springiness that so often forces you to squeeze out all of the gas. (Reinhart, p 209)

Wanting a flavorful pizza crust is a matter of opinion however. Not everyone cares as long as there are scrumptious toppings! Personally, I had the time and the desire. So, I opted to use a more "formal" dough recipe. Being somewhat short on time, I opted for the Basic Pizza Dough from Suzanne Dunaway's wonderful No Need to Knead.

It only calls for a teaspoon of yeast, and since there's only two of us, I cut the recipe in half. The dough took about 5 minutes to put together and set up in an oiled, covered bowl, then I just let it do its thing for about an hour and a half.

If I had been more thoughtful, I would have made the dough the night before, and let it slow-rise in the fridge for extra flavor. Dunaway's crust was easy to work with, and even after only 90 minutes of rising, still had a nice flavor. 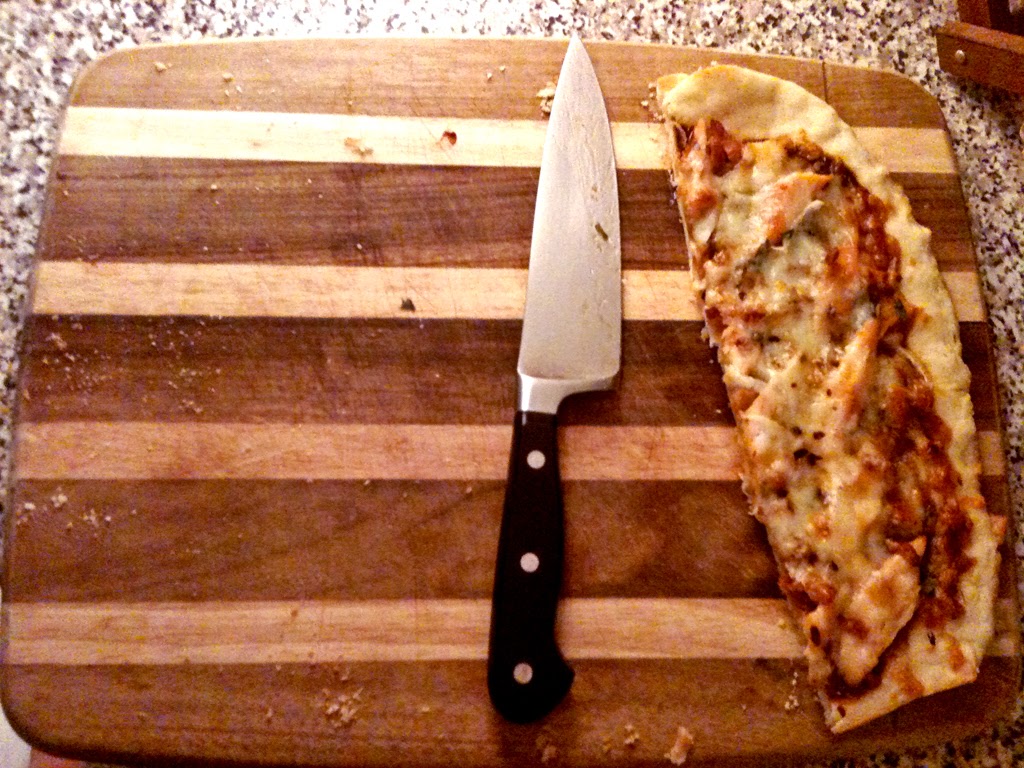 As for the rest of the pizza?

Wonderful! And as tiny as an ingredient as it might be, do not leave out the cilantro! The smoked chicken was great, no doubt, but this is a recipe where you might end up with 6 different flavors all battling for control of your taste buds unless the right six ingredients are used. The cilantro helps the creamy Mozzarella, sweet BBQ sauce, and salty bacon all work together in a lovely flavor explosion.

We devoured the pizza with a really nice bottle of white. Wallaroo Trail is a Chardonnay blend from Australia and Canada. Kind of fruity for me, kind of dry for the husband. It only ran about $10 at the Wine Rack! So, great bargain and tasty wine for a wonderful pizza.

This pizza is definitely going into rotation. I can easily prep the ingredients a day ahead if I want and stick them in the fridge. Spreading out the dough and topping the pizza probably took 10 minutes, tops.

Thank you Laura at The Turquoise Home for a great, simple recipe with a fantastic flavor combination!
Posted by Leti at 9:44 AM No comments:

Menu: Will Winter Ever End?

Much to my surprise, I have enjoyed seeing the sun during my first Canadian winter. For some reason, I assumed it would be all snow, ice, and frozen days until about mid-April, but happily, we have had quite a few blue skies to brighten our moods. That's not to say I've been out to the beach or roaming about in t-shirts, but I was genuinely worried I wouldn't see the sun for weeks at a time. Texas really does have tall skies and I've spent the greater part of my nights looking at the stars.

In the city, you can barely see them. How sad.

For the past two weeks, we have been eating! But I haven't updated for a myriad of reasons. Recently the management for the apartment we're living in decided to rip out our windows that developed frost on the inside and replace them with new, heat trapping things. This also meant they tore out our pretty glass patio door with screen and replaced it with a solid wood monster. I miss the light. The windows actually trap so much heat, that we have to keep them open at all times just to keep the apartment mildly comfortable. While I know the heat won't be on in the summer, I'm worried about the implications.

I also wound up distracted with a tiny "craft" project. I read a great post about menu planning on a really down to earth blog and it inspired me to do the same thing. I had originally planned to do a more visual weekly menu, a la Pinterest, but the more I got into the project, the more I realized how much time that would take and how inflexible it would actually be. Sure, it would look nice, but I'd have nowhere to put it! So instead, I made a menu of our favorites:


I gave our little apartment a name and decided that, based on the kinds of food I make, we have something of an almost bistro feel. I like rich, but simple foods, quiche being among the favorites. The menu design itself came from this website. This menu is totally for personal use, so it's really just a screencap with some extra alterations in photoshop. (Eventually, I'll remake it completely on my own.) That said, the website is really fun and I got idea after idea. Eventually, after fidgeting around enough in photoshop, I decided just to make my own. And so, behold, the weekly menus: 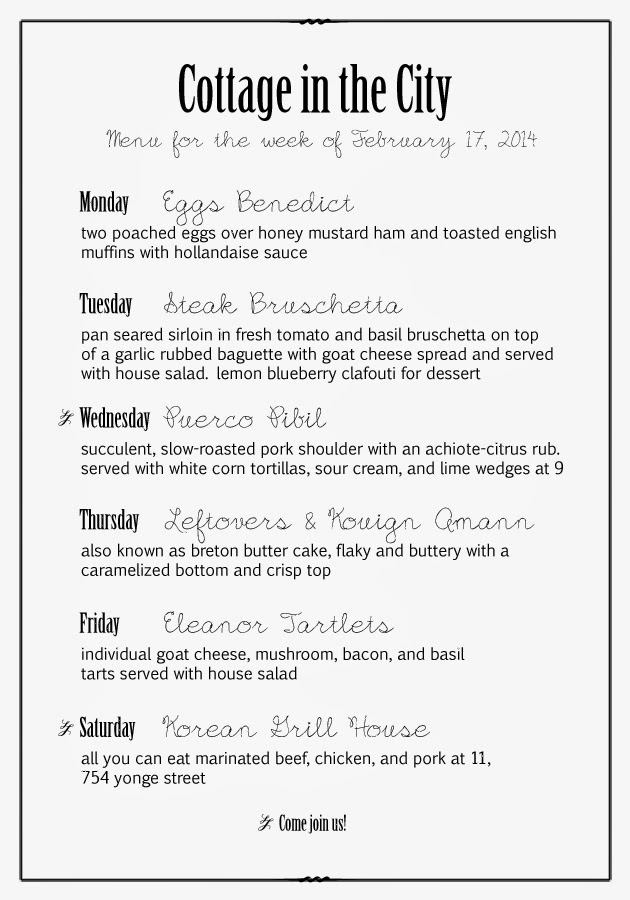 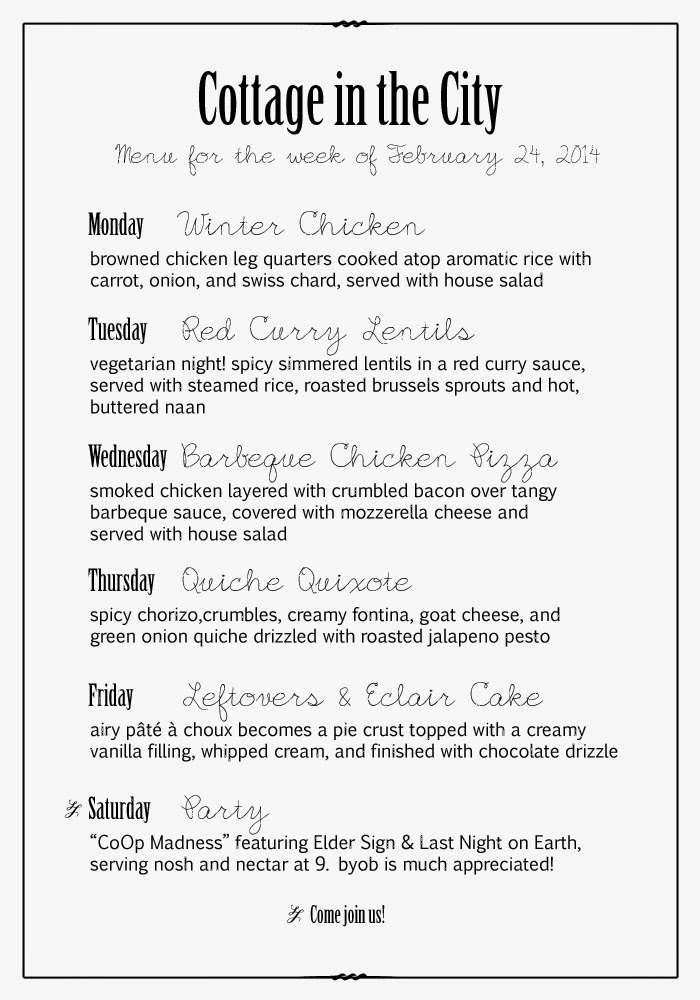 I really had a lot of fun putting these weekly menus together, so it will probably become a regular thing. I like putting them together, it doesn't take terribly long (and I currently have time to spare) and I like being able to email my husband the week's nosh. Additionally, if you check out the text under this Saturday's Party listing, you'll notice it says "nosh and nectar". The husband and I would like to expand our home bar, so on our upcoming party nights, we're going to be trying out and offering our guests a new drink each week. The nectar. This may become a new feature! A Let's Eat the Internet original.

Welcome to the Internet!

Hi! I'm Leti! I'm a Texan currently living in Toronto. There are so many tasty things online, so let's eat them! This is a collection of recipes found online, put into weekly menus, with reviews, modifications, and showdowns.

Top Five Recipes You MUST Try: